This guide may change as the game is patched.

A quick note on controls

Miner wars can be a daunting game for players not familiar to the 6DOF universe.  This guide is to help get you through the first mission, and out into the universe (where you can make yourself stronger for other missions) People have various setups of mice, joysticks, dual joysticks, and everything in between.  The first thing you should do is make sure your input configuration is set to your liking.  In almost all cases, I recomend you keep the keyboard default, and if you find the up/down thrust keys a little hard to reach, try putting them on your mouse or joystick on your other hand.

Very simply put, if it's too easy, pick a harder setting.  If it's too hard, pick an easy setting.  This guide applies to all settings. 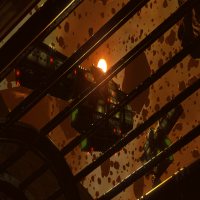 So you can consider this your "birth" into the universe.  It's confusing, you don't even know how to crawl yet, and you have alarms blaring all over, marcus yelling at you to get out.   Just calm down for a minute....  Take a deep breath.  Here comes 2 red blips on the radar screen.  Aim your reticle [ + ] right in the middle of their [  ] and spam some missles and bullets.  Both blips dead?  Good, we can proceed.

Press T.  You'll see a line of blue arrows.  Just keep following these as fast as you can(press shift for afterburners), avoiding all enemies for the time being.  You'll be flying straight up a mine shaft till you arrive at a wall of debris.  There should be little cracks just big enough for you to scoot through.  On the other side of the debris there will be one enemy.  Quickly kill him, then fly into the small tunnel.  As soon as you're about 10 feet down the tunnel, turn around and kill anything following you.

Keep following the blue arrows, completing each waypoint.  Eventually you'll end up in the hangar.

Hard way: You try and activate the turrents and defend yourself from wave after wave of enemy ships for 10 minutes.

Easy way:  Look for a giant ship on the floor of the hangar.  Look at which way its guns are pointing. Align yourself with the guns, then turn 180 degrees.  That wall is where the Sapho will be.   If you look to your right, you'll see a tunnel that the enemy ships come out of, and a bit of exposed asteroid around the tunnel.  Blast upwards and to the left of the tunnel (I like missles, use a drill if you want) You'll see empty space.  Fly out of the hangar, and simply wait inside a nearby asteroid for Sapho to arrive.

A game of desperate measures

You're now in the Sapho, do you go straight to the next mission, or do you explore the universe a bit?

You want to explore the universe, and here's why.   Just about every high end item in the shop is out there in the universe somewhere for FREE.  No saving money, no farming, no nonsense like that.  Just explore around, don't die, and you'll find boxes of weapons, ammo, and other gear essential to beating the harder levels.

Several sites have battles going on between NPC neutral or green ships, and red ships, and on ocassion will leave a red dead, but not destroyed..  Also the [[Solar Flare]] tends to have the same effect on any ships unlucky enough to be caught in its path.  My personal favorite is graverobbing at New New York.  The missle flare/chaff is worth $21,000 there, so it's pretty simple to get your ship equipped with everything you want.

One last tip any new miner should know.  Always check Sapho's inventory before, and after you finish a mission.  As long as it didn't contain any of the above mentioned items, it will generate new ones.  Another handy tip to remember is if you fly 2000m out from Sapho, these items will regenerate again.

If you have a really hard mission, just fly loops around Sapho and collect as many repair kits as you can before having to go into battle.  Repair kits stack, so you can almost think of extra repair kits as extra armor.