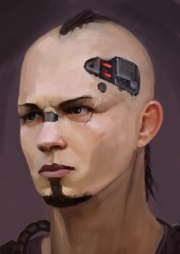 The early 21st century has shown immense advancement in prosthetics – starting with artificial limbs as medical replacements for amputees and continuing with additions to human subjects, giving humanity a glimpse of superhuman abilities. During the ‘40s and ’50s, several augmentation technologies were developed and widely spread, allowing the connection of computers (and other electronic devices) with the human brain, enabling enhanced control and improved performance. Most of the technologies were legal and promised great business opportunities for their researchers and manufacturers. Many “cyberlabs” (or also Augmentation Clinics) were founded – a sequel to 20th century plastic surgery clinics, offering a wide range of “beneficial body” modifications. Some humanists, naturalists and religious speakers protested, but aside from some dangerous adjustments, (mostly hacked military technologies), the science and art of augmentation flourished and becoming widely popular due to overwhelming acceptance by public and massive commercial campaigns.

Side effects on some individuals included depression, psychotic behavior and loss of motivation, but most of the augmented individuals claimed the implants and adjustments improved their overall performance, abilities and quality of life. Over decades, the market had to offer more and more augmentations and their efficiency increased. Modules for wireless connection of human brain directly transmitted to a computer, strong and supersensitive limbs allowing for superior athletic abilities and even new sports and games began to develop. In addition, lungs and other organs with increased capacity and abilities resulted; eye implants allowing for infrared vision, X-ray vision through solid objects and more. The crime world had changed forever, with empowered thugs, brawlers, and gangsters equipped with artificial skin, bone and limb replacements, allowing for extreme endurance and fighting capabilities. This chaos was balanced only by state-of-art police and military technologies supplied by governments and corporations.

Compared to great leaps in cybernetics, genetics suffered deeply from sanctions and regulations by multiple governments. Only scientific, non-commercial research in the fields of DNA manipulation and modification was allowed, so no widespread effects on population and lifestyle resulted. Within the private sector, genetics was used only to scan embryos for potential defects and hereditary diseases. Of course the fields of virology, bacteriology and food production benefited from the advancements in genetics, but no human DNA modification was allowed, until the first half of the 21st century, when research was officially approved by the major factions. Secret military research was performed, but the results were never published, at least up to the revelation of G.F. Mauler and his Space Human Concept (also called Maulerian Eugenics). This research was funded by the Nazi power circles and was performed in secret at Deimos laboratories. It represented a thorough and complex view on humans, evolution and society which influenced many thinkers and philosophers as well as politicians, military leaders and even mystics and occultists. The premise and facts supporting modification of human body and DNA was simply astonishing; the possibilities during one’s lifetime included enhancing the capabilities of the individual and extending the human life span to over one hundred years quite easily (at least this was presumed according to the research). However, further research soon surfaced that disclosed the alteration of personality and mutations of DNA, resulting in even more attention from scientific and military experts. In 2063, Mauler and his team introduced a group of cybernetic mutations, “The Seven Reborn”. The group was DNA altered, psychologically re-educated prisoners, formerly sentenced to death by EAC for severe crimes (murders, rapes). The Seven Reborn issue soon became highly controversial and all further DNA alteration research on humans was banned. Deimos Labs closed and Mauler was arrested for violating scientific doctrines. During a police SWAT team raid on Deimos Labs, hundreds of former death row prisoners were discovered - illegally held there. Mauler was subsequently quarantined and sentenced to spend rest of his life at his summer residence in Quebec, Canada.

During the conclusion of the hearings after the judge announced the final verdict, Mauler prophesized: “You may ban my research and lock me out from your world, but you will never stop what I have started! For the Space Human is the next natural step of mankind - a step of controlled evolution, giving the human spirit the perfect body it deserves. We are learning the basic secrets of the Universe, the keys to the Kingdom of God on Earth, the Paradise to live in within our own bodies of dust and flesh.”

G.F. Mauler died in Quebec in 2070 during the Solar Event. He became known as the Father and the Prophet for the new Space Human movement among scientists, intellectuals and politicians. The research on human DNA alteration continued in secret, far from the attention of the public eye.