"We Own the Shares!"

OmniCorp holds a specific place in the post-Solar Event universe. Although the number of members within this faction is not as high as in some other cases, OmniCorp is definitely among the top power holders thanks to several factors: high technological research and production facilities, well-educated, qualified personnel and specialists and last but not the least great economic potential and ownership of shares in many of other factions and corporations. OmniCorp holds a lot of investments inside all major factions cooperating with them (that is, except for China, Russia or in some situations, Arabs). As a result, OC has a lot of connections amongst diplomats, industrialists and decision makers across the political scene. OmniCorp nowadays focuses mainly on three fields of interest: Development and production of new high-end spaceships (including equipment and weaponry); transport services (OC owns tens of huge inter-sector transport ships); and research and development in the fields of advanced information technologies (including software solutions for corporations and military, AI research, software for applied biomechanical and nano-tech implants, etc.) The official OmniCorp motto is inscribed within three conjoined hexagons (like in a bee hive), signifying “3 P” – Progress, Profit, Prosperity. 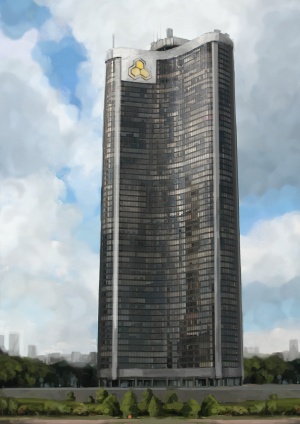