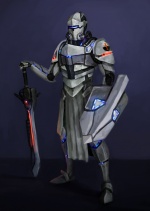 Population: 314 (knights are replaced in case one dies to keep to this count)
Founded after the Solar Event as protectors of righteousness for the entire space, this faction is solely military, being funded from external sources. They have no territory of their own; their only space headquarters is a heavily guarded outpost - Fort Valiant at the borders of The Church. Templars own a military force of about 300 space craft, mostly heavy fighters and all-purpose combat fighters. Apart from “policing” the known universe and trying to enforce law in the inhabited space, they also act as protectors of The Church, since this faction has no military force of its own. Pilots are chosen both on their skill and experience as well as possessing a sense of justice, righteousness and faith.

Population: A few hundred.
An Independent corporation that focuses only on rescue; they work as an insurance company – if you pay insurance fees and something bad happens, they send a ship and offer help - fuel, oxygen, protection, repair ship.

Population: A few hundred.
One of the corporations focused on trade and transportation services, working as a counterweight to semi-monopolist OmniCorp, membership-based Space Traders’ Guild and independent miners. The company is not very influential; however, it offers a nice choice of goods and services and (thanks to their neutrality) they are somewhat accepted by most of the factions.

Population: Between one and two thousand.
Similar to the previous company, but focused on mining, they employ miners who don’t want to pursue their own fate or risk buying or leasing a spaceship and offer full equipment and basic training for low classes while offering a standardized wage and share of the profits based upon one’s efficiency.